According to a report by TVLine, Violett Beane will be playing the role of Jesse Chambers. Flash comic book fans better know her as the speedster Jesse Quick.

As the site reports, her role in The Flash is best described as a “brilliant but quirky college student who gets caught up in the battle between The Flash and Zoom”. 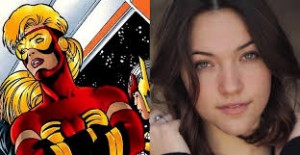 Jesse Quick is the child of the Golden Age superheroes namely Johnny Quick and Liberty Belle as in the comics who played an important role in Geoff Johns runs on both the JSA and The Flash. It was Johnny Quick who taught his daughter the formula that allows him to draw Speed Force, 3×2(9yz)4a.

As for her television description, one wonders whether she will be Earth-2’s Johnny Quick or if she would have figured out the formula on her own.

In the comics however, Chambers took on the identity of her mother, Liberty Belle. Of course, in this instance, TVLine has referred to her as Jesse Quick while the CW usually refers to casting news by the character’s civilian identity. It’s probably to avoid any confusion as to the name that Chambers will take in her role on The Flash.

Speaking of which, she marries Hourman Taylor in the comics and which being developed as a pilot by the CW doesn’t seem to be going anywhere at the moment.

Also, network chief Mark Pedowicz has recently announced that they are done developing DC Entertainment properties for some time since DC Legends of Tomorrow will join iZombie, Flash and Arrow on the network.